About that 'democratic deficit' ... 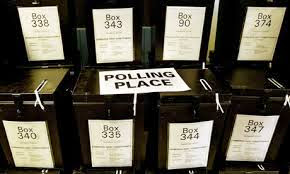 As the protagonists in the referendum debate paddle fractiously around the shallow end of the intellectual pool, so the need becomes greater for a civilised and less strident exchange of views, one focused on the real issues.
Like most people, my criterion for placing a 'yes' vote is simple – will an independent Scotland be a better place for my children and their children to live in? For the moment, I’ll put to one side the question about what exactly would make the country a better place in which to live.

It hardly needs pointing out that some people will never, under any circumstances, vote for an independent Scotland, while others will remain committed to independence no matter which arguments are presented to them. The result, therefore, will probably be determined by people sitting in the as-yet-undecided camp. From what I hear and read, a lot of folk are going to vote on the basis of gut feeling and emotion. There is nothing wrong with that, but it can occasionally get a bit silly. I heard a news item on Radio Scotland in which a member of the public said that the recent comments by David Bowie had "helped make up her mind" to vote yes. Without wishing to be too unkind, I’d suggest that if you place your vote on the basis of a throwaway remark by a pop star, you probably shouldn't be allowed out of the house without a ‘name and address’ tag on your jacket and someone holding your hand.
I do understand the emotional pull of a Yes vote, but if we’re going to set ourselves up as an independent first world nation, with responsibilities for the economic well-being of some five million people, my preference would be to spend a bit of time focusing on the arguments, the practicalities and the numbers. Accordingly, some of the flimsier arguments should be quietly dropped. One example would be the notion being put forward by the Yes campaign that Scotland has suffered from a ‘democratic deficit’. I think a brief examination of the facts renders that an extraordinarily feeble case to present.

In addition to having our own parliament (unlike other parts of the UK), Scotland is proportionally over-represented in Westminster. We have 8% of the UK population, but account for 9% of the seats in the House of Commons. By contrast, the London metropolitan area -to take one obvious example- is home to 21% of the UK population, but represented by only 11.2% of our MPs.
Scottish MPs at Westminster can vote on issues which do not affect Scotland, while MPs representing English, Welsh or Irish constituencies do not have a say in any of the business of the Scottish Parliament. On that basis alone, how is it possible to conclude anything other than that Scottish voters are getting a bigger bang for their electoral buck than any other part of the UK?

Where does this idea of a 'democratic deficit' come from? Is it a by-product of our passionate and oft-expressed desire for independence? Well … not really. As recently as 1959, the SNP could only muster 0.5% of the votes in a general election. By the mid-eighties, when Mrs Thatcher was in her pomp, they were polling around 12%. At the last general election, as the only explicitly separatist party, they got 19.9% of the popular vote. The combined vote of the unionist parties was around 78%, so Scotland can hardly claim to have been clamouring for independence. At the most recent Scottish parliamentary elections in 2011, the victorious SNP actually gathered fewer votes in Scotland than Margaret Thatcher’s hated Conservatives got in the 1979 general election. Look it up if you don’t believe me.

The way this ‘democratic deficit’ argument is presented, you’d think that Scotland has had to endure decades under the jackboot Reich of hard line, right-wing Tory administrations, but that’s far from being the truth. Since the end of the second world war, general elections in the UK have produced 35 years of Tory rule and 30 years of Labour rule, plus 4 years under the present coalition government. In democratic terms, that seems like a fairly reasonable split between what -on paper, at least- are opposing political ideologies. And if the vast majority of Scots invariably vote for unionist parties, what gives us any more right than the residents of Yorkshire, Cornwall or Suffolk to feel aggrieved by the vicissitudes of the electoral process?

When people say, in the context of this independence referendum, that there is a 'democratic deficit', I think what they mean is: “We don't want a Tory government.” There is nothing wrong with thinking or saying that, but to break up a successful political union just because the odd election doesn't go your way seems like rather a selfish impulse.
Blair Jenkins, the Chief Executive of Yes Scotland, has gone on record as saying that independence will mean "no more Tory governments, ever." That sentiment might appeal to a lot of people, but that doesn't make it right. For those of us who think that you can hardly get a fag paper between the Liberal Democrats, Labour and the Conservatives as it is, this looks like a desire to narrow even further the choice available to voters. In that sense, the 'brave new Scotland' promised by the Yes campaign is already tainted by some profoundly illiberal impulses.

This might come as news to some folk, but democracy is not about getting what you want all of the time. It is about representing, as far as is possible, the current will of the people, which means that sometimes your favoured side will win and sometimes it won’t. The make-up of post-war British governments is remarkably evenly split and that is, arguably, one of the strengths of our current system. It’s not just that you can’t win every election; it’s that you shouldn’t be able to win every election.

And this is something that people who go on and on about that ‘democratic deficit’ should consider: the only countries in which it is possible for one grouping to win every election are countries in which most of us really wouldn’t want to live.