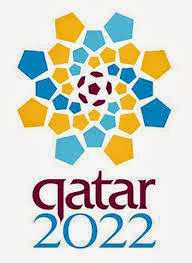 I feel a bit sorry for the guys at FIFA. It's really unfair the way that folk are criticising them because of the slightly chaotic situation surrounding the World Cup, which may (or may not) be played in Qatar in the summer (or winter) of 2022, or maybe even the tail end of 2021. When the tournament was first awarded to Qatar, nobody knew that in June and July, when the World Cup is usually (i.e. always) played, that that small country in the Persian Gulf gets very, very hot. The information about soaring temperatures was only made available once a crack team of scientists had looked it up on the internet. Once these scientists had produced a confidential report revealing that human beings can get 'really quite uncomfortable' at temperatures of 50 degrees centigrade, the guys at FIFA sprang into action and started floating the idea of a winter World Cup.

Another trifling point of criticism raised by some folk is that Qatar has no significant football culture, no previous experience of hosting big sporting events and, with a population of less than two million, is way too small to host a World Cup. But it is by no means unusual for FIFA to award the World Cup to tiny countries with no significant football culture and no previous experience of hosting big sporting events. France, Italy, Brazil and Germany are just a few examples that spring to mind.

Some conspiracy theorists have disgracefully tried to suggest that FIFA may have had ulterior motives for taking the World Cup to Qatar, the country with the highest per-capita GDP in the world. What these cynics don’t seem to understand is that FIFA is committed to spreading the gospel of the beautiful game around the globe, because football, as we all know, is a liberating agent of change. History has provided us with numerous examples of nations with slightly unsavoury regimes being transformed by having some millionaire footballers drop in to kick a ball around their country for a couple of weeks. One has to suspect that anyone who criticises FIFA for taking this tournament to the middle east is probably a racist or an Islamophobe, or both. The more decent and optimistic among us will hope that some kind of political and cultural transformation will take place in Qatar once it hosts the 2022 tournament. Sources close to FIFA have privately expressed the view that, within a few years of hosting the World Cup, the country may well elect its first gay or female prime-minister. Well ... maybe not a gay one. Or a female. Or an an elected one. But the hope is in our hearts.


Amidst all of these nit-picking criticisms, the conspiracy theorists have overlooked perhaps the most important factor of all. What they just don’t seem to get is that, when the bidding process for the 2022 World Cup started, the competing bids from Australia, USA and Japan had already put themselves at a severe disadvantage. In their misguided enthusiasm, they had foolishly pinned their hopes on having 'tournament-ready' infrastructures, incorporating completed stadia, hotels, rail-links, roads, communication centres etc. It was arrogant of them, or at least incredibly naïve, to go against one of FIFA's core objectives: namely, to generate as many opportunities as possible to negotiate lucrative contracts for building stadia, hotels, rail-links, roads and communication centres. This is clearly the basis on which tournaments are awarded by the entirely above-board-and-in-no-way corrupt FIFA delegates. When the tournament is awarded to a country that has to invest billions in infrastructure, the beautiful game benefits through all of the lucrative contracts that have to be negotiated with the huge companies that build stadia, hotels, rail-links, roads and communication centres. Fortunately, this process is always entirely transparent and completely above board; there is absolutely no chance that any unscrupulous contractor could tempt any FIFA delegate with kick-backs, bribes or large sums of money deposited in offshore bank accounts. Ten minutes worth of research on the internet will assure you that FIFA has a squeaky-clean track record in this department.

So please, let’s give FIFA a break. It has a proud and unblemished track record of looking after the interests of the beautiful game. Anyone who suggests that any of its delegates were driven by self-interest is a deluded conspiracy theorist or (see above) a racist.
When the World Cup goes to Qatar, the country with the highest per-capita GDP in the world, it may just find its spiritual home.