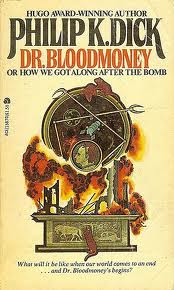 Originally published in 1965, Dr Bloodmoney (or: how we got along after the bomb) traces the story of a group of people living on the west coast of the USA in the aftermath of a nuclear war. Dick paints a strange landscape in which the post-blast radiation has produced bizarre mutations like talking dogs, intelligent rats and ‘evolved’ humans with highly developed skills.

Meanwhile, circling the earth, the lonely astronaut Walt Dangerfield is still in orbit seven years after the conflagration, growing weaker by the day but faithfully maintaining his broadcasts to the survivors. With enough supplies to last for several years, Dangerfield, with his avuncular homespun humour, is a purveyor of hope, an orbiting disc jockey /town crier, connecting the disparate and far-flung communities as he relays messages, survival tips, recipes and advice on how to rebuild civilisation.
Down on the surface, the ‘evolved’ humans are not always (or even often) tolerated, but in the case of Hoppy Harrington, the community of Marin County is prepared to overlook his 'otherness' because of his extraordinary technical skills. Born with no arms and no legs, Harrington is embittered and scarred from the discrimination he had encountered in the pre-war world, but finds his own peculiar niche after the bombs have dropped. A humble TV repair man before the conflict, he becomes a brilliant and indispensable mechanic, developing his own personalised servomechanism technology, along with his incredible gift of telekinesis. These skills and powers make him one of the most feted, then feared, people in the country. As his influence and capriciousness grows, we start to realise that his ultimate goal is to dominate first Marin County and then the rest of what remains of the United States.

When Walt Dangerfield starts to experience symptoms of an unknown medical condition, his listeners are worried, mindful of the fact that they rely on his transmissions to maintain some sense of continuity with the old world. We assume the astronaut to be ill, or perhaps a hypochondriac, until we discover that he is actually under psychic attack from the increasingly powerful Harrington, who has not only mastered Dangerfield’s voice and idiom, but has developed the ability to run the equipment in the orbiting satellite by remote control.

In a typical Dickian twist, Harrington meets his nemesis in the unlikely form of Bill Keller, a sentient foetus living inside his seven year old sister, Edie. Bill experiences life and interprets it through dialogue not only with his sibling, but with the spirit world. He can communicate with the dead, read the thoughts and feelings of others and has the ability to envisage future events. As the story develops, so does his yearning for an independent life; he begins to perfect a technique for leaving his sister’s body in order to 'occupy' living beings. After a couple of false starts, he finally gets his wish to see, hear and feel for himself when he transfers briefly into the body of an owl and then, at the climax of the novel, into another human being.

Because his mental health was not always entirely robust, it has been claimed that Philip K Dick didn't merely write about ideas that he dreamed up; perhaps, some folk believe, he wrote about things that he actually experienced, or thought he experienced, in his everyday life. For those who subscribe to that theory, the fact that he had a twin sister who died after only a few weeks will be considered significant to the plot of this novel. However we analyse it, it is clear that when Dick is on his A-game, he can cram more ideas into one book than some writers stretch over an entire career. He is a deep thinker on a variety of themes: artificial life, parallel universes, theology, metaphysics and, above all else, the illusory nature of ‘reality’.

And by that, I don’t mean reality. Philip K Dick’s ‘realities’, you see, are always in inverted commas.
Posted by Raymond at 09:27